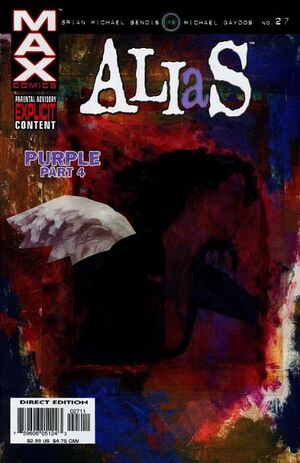 At The Raft, Jessica questions Zebediah Killgrave while agent Clay Quartermain watches from a security booth. Killgrave claims that Jessica and he are simply characters in a comic book, but that he cannot escape because he is not the writer. Jessica demands that he admit to just one of the many murders he was never charged with, but Killgrave continues to insist that Jessica is a character in a story, and that she craves the approval of her readers. Finally she gives up and leaves, turning down Clay's offer to help her explain the situation to Rourke.

Jessica returns to Rourke's home and prepares what she intends to say, but upon seeing Jessica, Rourke threatens to call the police. Jessica steps inside and sees a new report on the television detailing "a massive security breach" at The Raft that resulted in "a full-scale riot" and the escape of several prisoners including the Purple Man. Rourke accuses Jessica of orchestrating the breakout, and threatens again to call the police.

Outside her apartment, Jessica watches her windows as she calls Carol and leaves her a message. She then calls her mother and tells her to get to a safe location, but the conversation is interrupted by a call from Dr. Shamalayan. Jessica disconnects.

Outside her office, Jessica watches her windows as she calls the office phone, and Malcolm answers. Jessica learns that a man calling himself "Quarterflash" called, while another man has repeatedly called and hung up. She orders Malcolm to go home and watches as he leaves the office, then calls Clay and learns that Killgrave escaped an hour after she left The Raft. Clay tells Jessica that S.H.I.E.L.D. is tracing her phone in order to pick her up, but Jessica insists that she will only come in after Killgrave has been captured. A car crash interrupts the conversation, and Jessica flies away from the scene.

She arrives at Scott Lang's apartment and informs him that Killgrave has escaped, and Scott invites her in. Later that night, Jessica watches the commentators on a news show discuss the need for a superhero chain of command and protocol for situations like The Raft breakout. She falls asleep, and wakes the next morning to find ants swarming over Scott's dead body.

Retrieved from "https://heykidscomics.fandom.com/wiki/Alias_Vol_1_27?oldid=1406432"
Community content is available under CC-BY-SA unless otherwise noted.