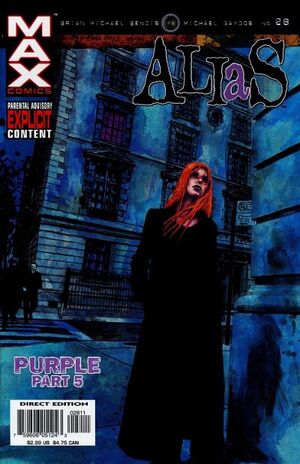 At Scott Lang's apartment, Jessica Jones finds Scott's dead body swarming with ants as Zebediah Killgrave comments on the aesthetics of "Jessica's comic book." Jessica accuses Killgrave of murdering Scott, and he admits that he is "the bad guy," though he reveals that he only made Jessica see Scott as being dead, when in fact Scott is alive. He then makes Jessica see her "worst nightmare," which is Scott engaged in a menage a trois with Miss Marvel and Luke Cage, before instructing her to accompany him outside.

On the street, Killgrave laments the lengths to which he has to go to attract the attention of superheroes, then instructs everyone on the street to "beat up the person to [their] left until that person is dead." The street erupts in a mass of mob violence. Killgrave watches, and Jessica experiences a vision of Jean Grey, who explains to Jessica that she implanted "a psychic defense trigger" in Jessica's mind after her "first Killgrave incident," and that Jessica can stop Killgrave if she chooses to.

Jean vanishes moments before the Avengers arrive, and Killgrave instructs Jessica to kill the superhero of her choice, but Jessica turns on Killgrave and beats him savagely instead. In the aftermath of the brawl, Jessica looks on as Killgrave's body is carried away from the scene before she is approached by Scott, who explains that Killgrave escaped The Raft after Carnage set off an explosion. Jessica admits to Scott that she's three months pregnant, and that the baby is not his, at which point Scott walks away.

A few days later, Jessica meets Luke Cage outside his apartment. He admits that he cares about her, and Jessica tells him that she's pregnant and that the baby is his. Luke asks if Jessica wants to keep the baby, and when she admits that she does, he agrees, suggesting that the two of them can start a "new chapter."

Jessica next appears in The Pulse #1.

Retrieved from "https://heykidscomics.fandom.com/wiki/Alias_Vol_1_28?oldid=1406433"
Community content is available under CC-BY-SA unless otherwise noted.