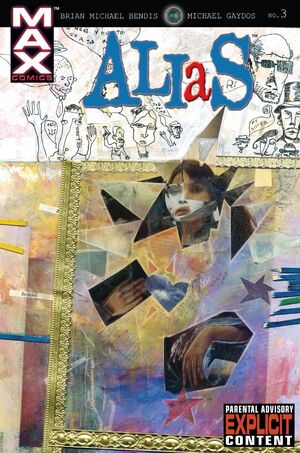 In a police station interrogation room Jessica waits for over an hour before Detective Paul Hall returns to question her about Miranda Pritchett's murder, as well as her own past as a costumed superhero named Jewel. Jessica tries to explain that she has been set up, but Detective Hall persists in trying to elicit a confession for the Pritchett murder, insinuating that Jessica suffers from multiple personality disorder and that perhaps it was Jewel who strangled Pritchett. Jessica becomes enraged at the accusation, but is prevented from saying anything too damaging by the arrival of attorney Matt Murdock. After ascertaining that Hall is not charging Jessica with any crimes, Murdock escorts her from the station, instructing Hall to schedule all future interrogations through his law office.

Outside the station, Murdock explains that Luke Cage contacted him after hearing of Jessica's situation from his "friends on the force." Murdock assures Jones that the police have no case against her, but asks her if she killed Pritchett; Jessica claims that she didn't, and Murdock, who knows that she is telling the truth, advises her get a good night's sleep.

Jessica returns to her office to find the tape containing Captain America's secret identity still in her possession, then calls the number of Murdock's business card to ensure that his law firm is real. After deliberating, she visits the home of her friend Carol Danvers, who had to miss out on the Avengers' mission due to a case of the flu. Jessica persuades Carol to use the Avengers' resources to track the phone number that he client had given her, and Carol agrees.

Later that night, Jessica receives an email from Carol indicating that the phone number is owned by LWS Enterprises. The email includes LWS's main phone line, which has a 202 area code, and Jessica calls the number to discover that it connects "the committee to elect the Democratic presidential candidate Steven Keaton."

Retrieved from "https://heykidscomics.fandom.com/wiki/Alias_Vol_1_3?oldid=1406408"
Community content is available under CC-BY-SA unless otherwise noted.