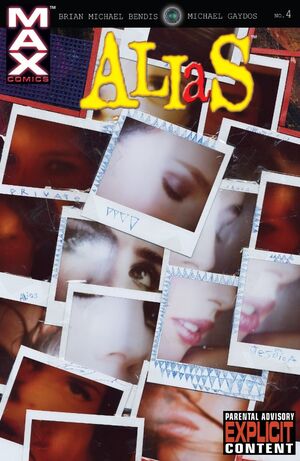 At a bar in Washington, D.C., Jessica watches a Steven Keaton campaign ad, including footage of George W. Bush meeting with various superheroes while being accused of "pacifying the special interests of...the elite and famous" and "having his ear bent by aliens, mutants and" "people hiding behind masks and shadows." While commentators on the television argue over the positive and negative aspects of the President's relationship with the powered community, Jessica realizes that she was set up to video tape Captain America's secret identity in order to damage the President of the United States. Eventually the political argument frustrates Jessica to the point that she inadvertantly shatters a shot glass in her bare hand, and when the bartender sees that her palm is uninjured, he threatens her with a baseball bat, calling her "mutant shit" and forcing her to leave.

Jessica walks down the street to Keaton's campaign office, where she finds the blonde woman who hired her to find Miranda Pritchett working. The woman spots her and flees to the alley behind the building, attempting to make a phone call before she spots Jessica again, dropping down from a neighboring rooftop into the alleyway. The woman faints, and Jessica finds her cellphone dialing "Lawson, Daviano."

Jessica visits the law office of Lawson, Daviano & Silver where she confronts David Lawson, accusing him of hiring her through a third party and demanding to know why. Lawson threatens to call the police, but Jessica calls his bluff by telling him that she has a story of her own to tell the authorities. She leaves, and stakes out Lawson's car in the parking lot, waiting for the lawyer to contact the person who hired him with the intention of following him after he does. While she waits, she receives a phone call from Matt Murdock informing her that the NYPD has dropped its investigation into her based on the autopsy results on Miranda Pritchett. He explains that "the bruises and indentations on the neck of the dead girl were those of a large man," ruling Jessica out as a suspect.

As Jessica listens to Murdock, a man with very large hands approaches the driver's side door of her car. Jessica disconnects with Murdock, and is promptly ripped from the car and thrown onto its roof by a mountainous man who attempts to strangle her.

Retrieved from "https://heykidscomics.fandom.com/wiki/Alias_Vol_1_4?oldid=1406409"
Community content is available under CC-BY-SA unless otherwise noted.