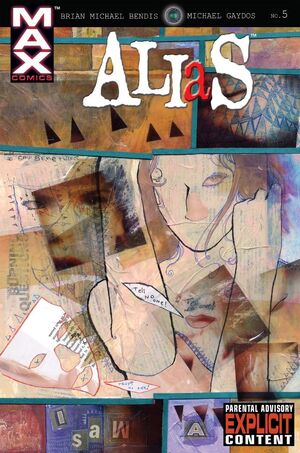 Jessica's assailant, Michael "Man Mountain" Marko, attempts to strangle her, but she brutally boxes his ears, forcing him to drop her, and punches him in the crotch. Jessica proceeds to beat Marko savagely while demanding to know who hired him, and though Marko refuses for a time, he eventually relents.

On a golf course, Mr. Zoumas discusses a film project with his assistant moments before Marko's body lands on the fairway in front of him. Zoumas' bodyguards draw their weapons as Jessica approaches, but Zoumas orders them to stand down so that he and Jessica can talk. He tells Jessica that she ought to sell the tape she made, and explains that his motivation in tricking Jessica into making the tape was so that she would "give up the flag boy to the press."

Zoumas explains that he and his associates had financed the President's campaign, but that the President had failed to fulfill his "moral debts." Zoumas tells Jessica that creating a scandal by exposing Captain America is simply a way of ensuring that the President is not re-elected, instead being replaced by Steven Keaton, "who does understand who and what [he is]." He then threatens that if Jessica either withholds the tape from the public or attempts to implicate him in the death of Miranda Pritchett, he will destroy her reputation in front of the media before having her killed in her sleep.

Jessica realizes that confronting Zoumas had been a mistake moments before she receives a phone call from Clay Quartermain, who instructs her to leave the scene immediately. He explains that Jessica has been unknowingly wearing a wire since she left the Pritchett crime scene, and Jessica watches a S.H.I.E.L.D. helicopter descend on the golf course to apprehend Zoumas.

After returning to New York City, Jessica watches a press conference on TV in which Keaton resigns from the Presidential race, crushing the wire that Quartermain placed on her. Moments later, she receives a visit from Steve Rogers, who requests the video tape. Jessica hands the tape over, and Rogers realizes that he had met Jones previously at Avengers Mansion. When he asks why she gave up the work of a superhero, Jessica explains that she never felt like she had the ability to inspire the public like the rest of the Avengers. Rogers counters that she protected him when he needed it most, unlike most people, and tells her to contact him if needs anything or decides to "try again."

Retrieved from "https://heykidscomics.fandom.com/wiki/Alias_Vol_1_5?oldid=1406410"
Community content is available under CC-BY-SA unless otherwise noted.