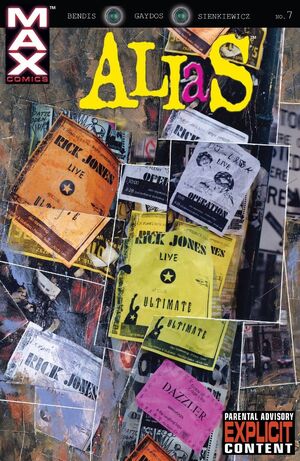 Jane Jones explains to Jessica that she married Rick six months prior, and that while he has been away for extended periods, he has never gone missing for several weeks at a time. Jane claims that Rick always spoke highly of Jessica, even though Jessica claims that she doesn't remember being related to Rick Jones, but Jessica agrees to look into the matter.

Alone, Jessica considers the difficulty of tracking down a man with the name Rick Jones. She then calls her mother to ascertain whether she has any relatives named Richard, and winds up in an argument after learning that her mother recalls no Rick Joneses in their family.

Jessica visits a bookstore to pick up a copy of Jones's memoir, Sidekick. She heads to a park to read, but is approached by a girl claiming to be able to see "an aura" indicating that Jessica has "powers." One of Amy's friends tries to pull her away before spotting Jessica's book and ranting about how Rick Jones "doesn't shut up." Jessica learns that Rick is known as a song-writer who performs at a bar called Ultimate, and leaves the park after confirming to Amy that she does, in fact, have powers.

That evening, Jessica visits Ultimate and continues to read Rick's book before he performs his set to thunderous applause. After his performance, Jessica heads back stage to meet him, but Rick flees into a back alley. Jessica follows, and is ambushed by Rick, who demands to know whether Jessica was sent after him by agents of the Kree or the Skrulls.

Retrieved from "https://heykidscomics.fandom.com/wiki/Alias_Vol_1_7?oldid=1406412"
Community content is available under CC-BY-SA unless otherwise noted.