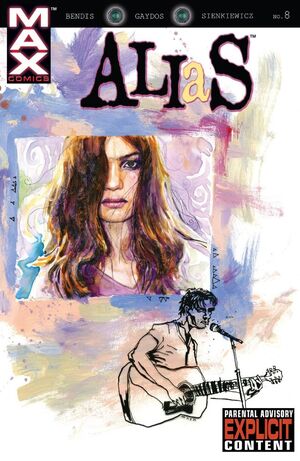 Confronting Rick Jones in the alley behind Ultimate, Jessica insists that she is neither a Kree nor a Skrull, and explains that Rick's wife hired her to find him. Rick claims that he cannot return to his wife because his life as a superhero would put her in danger, but claims that Jane is "a complete lunatic" who "gets an idea – a whim" "and then she decides they're true."

Jessica tries to convince Rick to talk to Jane in order to calm her down, but a backfiring car causes hinm to panic and flee. Jessica manages to catch up to him, and he explains that since the Kree-Skrull War, he is considered "a war criminal" with "a bounty on [his] head."

Jessica suggests going straight to Avengers Mansion, but Rick refuses, claiming that Captain America is angry with him for publishing Sidekick. Jessica compromises by suggesting they visit Reed Richards at the Baxter Building, and Rick finally agrees.

The next morning, Jessica and Rick arrive at the Baxter Building, but fail to get inside when the robotic secretary refuses them entry because they did not have an appointment. They leave instead, and Jessica calls Directory Assistance to get the number for the Avengers Mansion emergency line, but Rick panicks and disappears into the morning New York pedestrian traffic.

Retrieved from "https://heykidscomics.fandom.com/wiki/Alias_Vol_1_8?oldid=366288"
Community content is available under CC-BY-SA unless otherwise noted.