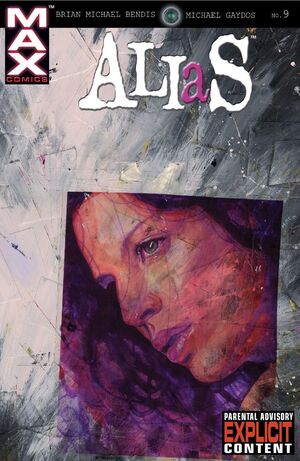 Having lost track of Rick Jones in the crowded New York City pedestrian traffic, Jessica calls the Avengers Mansion emergency hotline and leaves a message explaining Rick's situation. She walks back to her office, and calls Jane, leaving a message with her as well. She then logs onto the Internet to find a chat message from the husband of her other client, seeking to set up a meeting at a local Starbucks. She confirms the rendezvous, then checks her email, but promptly falls asleep at her desk.

Jessica wakes some time later to hear a man in her office answering her phone again. She wakes and overhears him speaking with Jarvis; she takes the phone from him, and discovers that the real "Rick Jones is safe and sound in Los Angeles." Jarvis informes her that the Avengers are aware of "a young man in the West Village area who fancies the idea of calling himself Rick Jones," and Jessica realizes that the man she has been trying to help is an impersonator. After Jessica hangs up, the man in her office introduces himself as Malcolm, and asks for a job, but Jessica orders him out again.

Jessica visits the park again to find Jane and Rick Jones reunited and happy, and Jane thanks Jessica profusely for finding her husband. Jessica leaves the two and heads to Starbucks, waiting for her other client's husband, Dr. Curtis Moss. He arrives, and Jessica converses with him as a stranger, learning that he is a psychotherapist. She asks about the strange case of the fradulent Rick Jones, which he explains is a case of pseudologia fantastica, in which people tend to believe outrageous lies because "they just want to know famous people." Jessica thanks Moss for answering her question, and then advises him to go home and come out of the closet so that he can stop hurting his wife.

Moss hesitates, then leaves, and Jessica thinks back to the night before, when she and Rick visited a diner before heading to the Baxter Building. Jessica had told Rick that his memoir resonated with her because she, like him, used to have physical reactions in the presence of super-powered individuals, and that she, like him, understood that reaction to mean that she was not meant to participate in the world of costumed superheroes. She had told him that she was relieved "to meet someone in the same freaky boat that [they've] been in."

At Starbucks, Jessica ruminates on something that Dr. Moss told her: "The peasants want the kings to come down and play."

Retrieved from "https://heykidscomics.fandom.com/wiki/Alias_Vol_1_9?oldid=1406414"
Community content is available under CC-BY-SA unless otherwise noted.