Start a Wiki
Alice the Goon 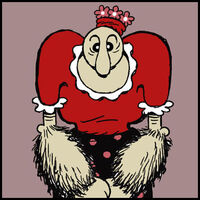 History of character has not yet been written..

Alice the Goon is a fictional character in E. C. Segar's comic strip Thimble Theatre and in the Popeye cartoon series derived from it.

Alice made her debut in the Sunday, December 10, 1933 Thimble Theatre strip, part of the "Plunder Island" storyline. As yet unnamed (and her sex unspecified), she worked as a guard for the Sea Hag, a vicious pirate and the last sorceress on Earth. She is portrayed as an Amazonian giantess (her height is eight feet) bald, with a large nose (reminiscent of a Proboscis Monkey, or of Rastapopoulos from Tintin) no visible mouth and extremely hairy forearms and legs. Her name and sex were given in the January 14, 1934 strip, after she had captured Wimpy.

Alice first appeared when the Sea Hag returned to Sweethaven searching for a former slave of hers named Cringly, as he is the only one who knows the location of Plunder Island, the Sea Hag's lair. At this time Alice was nameless and sexless, but when Wimpy is captured and locked in the deck of the Black Barnacle, the Hag's ship, the Sea Hag orders, "Keep an eye on him, Alice!". And from this moment on, the characters and the readers realize Alice is a female. Upon arriving at Plunder Island, Popeye and Alice fought violently and Popeye threatened to throw Alice off a cliff, until Alice's own child (its sex also unspecified) appeared and shouted "Mama!". Realizing that he is fighting a woman, which goes against Popeye's principles, Popeye released Alice and discovered that Alice was an unwilling slave to the Sea Hag (who had threatened Alice's own baby if Alice did not become her servant) then the sailor helped Alice gain her freedom. In fact, Alice was just one of a race of goons (though apparently their leader) enslaved by the Sea Hag; Popeye and Alice together raised them up in a successful Spartacus-like slave rebellion.

At the time, Alice caused controversy with protective mothers who claimed that her "frightening" appearance alarmed their children. Alice was therefore toned down to become a gentler and more motherly apparition.

In later appearances, Alice starts wearing a skirt and flowered hat. Her tribe live on Goon Island and the Goons are indistinguishable from each other. When Alice spoke, her words would appear as a series of meaningless squiggles. Wimpy is the only one who can understand her language. After being liberated from the Sea Hag, Alice came to live with Olive Oyl, and became a nursemaid to baby Swee'Pea.

Alice was a main character in the later Private Olive Oyl shorts, where she and Olive join the Army with humorous results; see The All-New Popeye Hour.

Spike Milligan was a fan of the Popeye cartoons and took the name of The Goon Show from Alice and her tribe.

Retrieved from "https://heykidscomics.fandom.com/wiki/Alice_the_Goon?oldid=1610970"
Community content is available under CC-BY-SA unless otherwise noted.