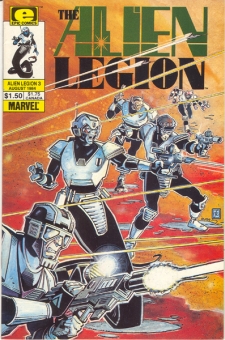 Lieutenant Torie Montroc leads a crack unit of Legionnaires on a frantic chase after a fanatic group of political dissidents who are holding a union ambassador hostage — in a bizarre kidnap plot to obstruct a galarchy peace treaty! The welfare of an entire planet's population is at stake! Also, Captain Sarigar faces a court martial for disobeying orders in order to save his troops from being slaughtered. Plus — a short story in which a desperate man's life depends on the Legion's failure!

Gribitz is a down-on-his-luck gambler who loses the last of his zats at Junwa's Pleasure Dome. After being dragged before Junwa and threatened, he sees a news broadcast of the Pacifist Fellowship engaging in militant action and watches several Legionnaires leave the establishment to respond to the emergency. Immediately, the other gamblers seize on the odds of the Legion being successful, so Gribitz bets heavily the other way, then sets out to sabotage the Legions efforts. He plants a friction bomb on their vehicle, and thinking that this would waylay them long enough to ensure their failure he goes home to retire.

Much later, after switching on the news, Gribitz is horrified to see that the Legion has been successful and the Pacifist Fellowship thwarted. Junwa's thugs then arrive and spirit him away. Some time later they open the door of their vehicle and throw Gribitz's lifeless corpse out onto the road.

Retrieved from "https://heykidscomics.fandom.com/wiki/Alien_Legion_Vol_1_3?oldid=1529940"
Community content is available under CC-BY-SA unless otherwise noted.