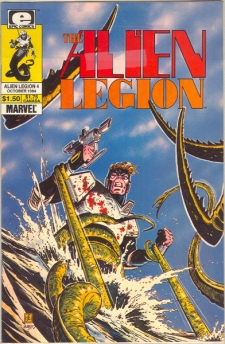 Appearing in "The Killing Zone"Edit

Torrie Montroc lies wounded on a battlefield, and there's no one to help — because Sarigar has already pronounced him dead!

Sentenced to sixty days imprisonment for disobeying orders, Zeerod recounts the tale of how he left a comrade behind in the Union Regulars. He remembers how Harkilons attacked a Union base and drove him and his friend into the jungle. Naboc had been badly wounded during the escape, and Zeerod could not carry him all the way to the next base. With a Harkilon jungle sweeper bearing down on the pair he was forced to abandon his friend and flee while Naboc screamed out behind him. Zeerod goes on to explain how, the following days, he resigned his commission as a general in the Union Regulars, and joined the Legion. As he concludes the story, he notices that his audience of one in the next cell has fallen asleep, and sinks into slumber himself.

Retrieved from "https://heykidscomics.fandom.com/wiki/Alien_Legion_Vol_1_4?oldid=1529942"
Community content is available under CC-BY-SA unless otherwise noted.