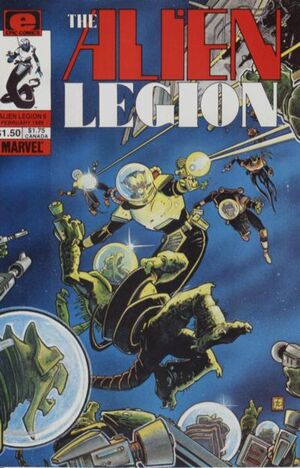 The Harkilons deploy their first nuclear weapons! And it looks like they'll use them before the Alien Legion can stop them! Plus in the second feature, Commander Nodrad reveals the truth behind his conflict with Sarikar.

Major Nordrad, bitter at being made to look the fool after having blocked Sarigar from submitting valuable intelligence, prepares to resign in order to avoid being brought before the disciplinary board and stripped of rank. He then sits and waits for Sarigar to arrive, at which point he pulls a gun on him. Sarigar asks him to hand the weapon over, but Nordrad starts shooting instead. Sustaining only a minor wound, Sarigar quickly overpowers Nordrad and then has him escorted away.

Retrieved from "https://heykidscomics.fandom.com/wiki/Alien_Legion_Vol_1_6?oldid=1529946"
Community content is available under CC-BY-SA unless otherwise noted.