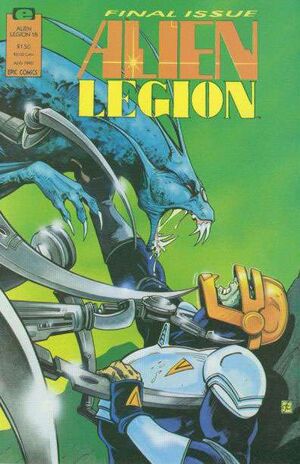 Appearing in "Return to the Planet of the Iks!"Edit

Synopsis for "Return to the Planet of the Iks!"Edit

During a Legionary Tribunal Jugger Grimron testifies as to how he was recruited (kidnaped) by The Iks (Privates Mik, Ric, Nik) and taken to their home world Ruxpin IV in order to save it from an armed team of Xenons. The Xonons were mining Ruxpin IV and shooting the minerals off world.

Retrieved from "https://heykidscomics.fandom.com/wiki/Alien_Legion_Vol_2_18?oldid=1569771"
Community content is available under CC-BY-SA unless otherwise noted.