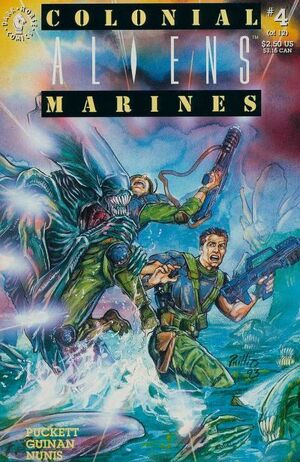 The colonial marines set down on the planet known as Bracken's World. On this world is a facility that farms massive kelp beds. The marines investigate the facility because there is not supposed to be an outlet here.

When they arrive, dozens of mutated bug-men attack them and the marines have to fight them off. Retreating from the main building, they rendezvous in the middle of the kelp beds. Alien Xenomorphs with aquatic characteristics leap from the kelp beds and begin attacking them. The marines hold them off long enough until the dropship arrives to pick them up.

Retrieved from "https://heykidscomics.fandom.com/wiki/Aliens:_Colonial_Marines_Vol_1_4?oldid=1408925"
Community content is available under CC-BY-SA unless otherwise noted.