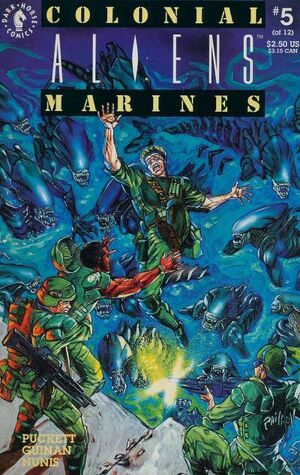 We've been played for wankers, sir! The bugs are here--NOW!

The Colonial Marines (CM) have landed on a planet called Bracken's World. It's an ocean planet. They've found a small floating colony and have taken their injured there. The locals are not pleased at their presence. They're even less pleased by the CM's unwillingness to share information, other than that there is a Xenomorph infestation on this world. The CM are unable to contact command and receive orders.

The CM's are on patrol outside the walls of the colony when they are attacked by a pack of Xenomorphs that seem to have evolved in to forms that are capable of surviving in the oceans of this world. They hold them off and try to defend the city, with the help of air support, but the Xenomorphs use their acid blood to eat through the colony walls. The issue ends with the Xenomorphs entering the colony and the commanding officer freezing up under the pressure. He seems directionless without commands from central.

Retrieved from "https://heykidscomics.fandom.com/wiki/Aliens:_Colonial_Marines_Vol_1_5?oldid=1408926"
Community content is available under CC-BY-SA unless otherwise noted.