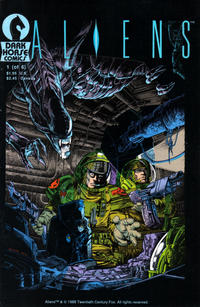 Rebecca "Newt" Jordan, now an adult is a patient inside a psychiatric ward. She undergoes special therapy sessions, but still suffers nightmares of her childhood experiences with the Xenomorphs on Acheron.

Newt is not the only one who suffers nightmares of that day. Corporal Dwayne Hicks, formerly of the United States Colonial Marines languishes in a prison cell on a drunken disorderly charge. An administrator named Perkins releases him and tells him that his presence is requested by Colonel Stephens of the USCM. Stephens has him meet with a man named Orona concerning a classified mission. Orona shows Hicks video surveillance footage of an orbital Coast Guard ship assigned to destroy an abandoned vessel before it falls into Earth's orbit. The crew of the Coast Guard was killed by a Xenomorph. Orona wants Hicks to trace the course trajectory of the ship and provide him with an alien specimen. He feels that Hicks will agree to the mission out of a sense of redemption.

Meanwhile, an industrialist named Salvaje manipulates television signals to broadcast subliminal imagery across its stations, particularly those that host evangelical programs. The subliminal image contains a shot of a Xenomorph, whom Salvaje regards as some kind of Messiah.

In the psychiatric hospital, Newt witnesses one of these programs and sees the image of the Xenomorph. Corporal Hicks comes to visit her and tells her that the Company has acquired a course trajectory to the aliens' home world. Hicks feels that Newt may require the same sense of closure that he does, so he invites her to accompany him. Newt agrees. Suddenly, orderlies rush into the visitation room and drag Newt away to her room. Hicks is powerless to do anything and Newt screams for help.

Retrieved from "https://heykidscomics.fandom.com/wiki/Aliens_Vol_1_1?oldid=1533302"
Community content is available under CC-BY-SA unless otherwise noted.