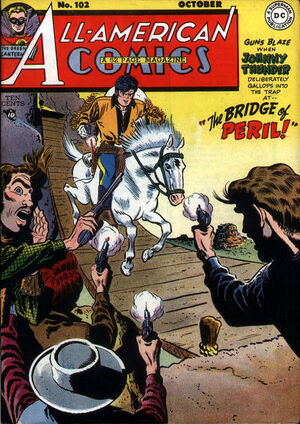 Appearing in "The Saboteurs of Science"Edit

Synopsis for "The Saboteurs of Science"Edit

Dr. Bernard Ewhall has invented a chemical treatment to be used on surgical instruments which would allow doctors to perform surgery in the dark. While he's showing off the invention to Charles McNider, Revelk and his gang raid Ewhall's home. McNider uses a blackout bomb to temporarily blind the crooks, switches to Dr. Mid-Nite, and gets Ewhall to safety. However, the crooks knock him out, and leave him in a trap, designed to kill him. Dr. Mid-Nite escapes the trap, follows the crooks, and once again saves Dr. Ewhall. This time the gang is caught. They had wanted Ewhall's invention to use on their burglar tools allowing them to use them in the dark.

Appearing in "The Convention Crooks"Edit

Synopsis for "The Convention Crooks"Edit

Retrieved from "https://heykidscomics.fandom.com/wiki/All-American_Comics_Vol_1_102?oldid=1483480"
Community content is available under CC-BY-SA unless otherwise noted.