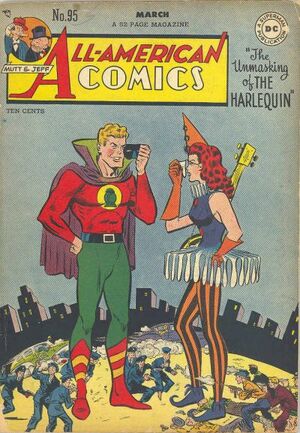 Maybe not -– but the sharp ends of a starfish helped to cut the ropes!

Appearing in "The Unmasking of the Harlequin"Edit

Synopsis for "The Unmasking of the Harlequin"Edit

Synopsis for "Mind over Murder"Edit

Boss King goes to extraordinary lengths to induce Doctor Mid-Nite to question his own sanity. He sets up a fake publishing company and releases a pulp magazine containing an alternative version of the story in the current issue of Charles McNider’s pulp. That story is an account of a recent battle between Boss King and Doctor Mid-nite; in the “real” story (in “True Adventures of Dr. Mid-Nite”), Mid-Nite won that battle; in the fake version (in “Real Adventure Yarns”), Boss King wins.

McNider sends Myra out on an errand and changes identities, then pays a visit to the new publisher’s office, where he finds Boss King himself, inexplicably unjailed and running a magazine company. King calls in two henchmen and there’s a fracas, during which Mid-Nite gets head-konked with a thrown pistol; this fails to knock him unconscious, but a follow-up head-konk, from Boss King himself, does.

Mid-Nite wakes up in a jail cell, having been dumped on the front steps of the local police precinct. The cops do not buy his story about the pulp magazine, and the desk sergeant even shows him the current issue of “Real Adventure Yarns,” with no such story in it. The police urge him to seek medical attention. To prove his point to the cops, the Dark Crusader leads them to the upstart publisher’s office. But when they arrive there and step inside, it’s Dr. McNider’s office, with Myra Mason sitting at the front desk. Concerned, she calls Dr. McNider into the room, and in he comes. The cops leave Mid-Nite in the doctor’s care.

It soon turns out that Boss King has also set up this fake doctor’s office, and kidnapped Myra Mason to act the part of secretary-receptionist there. Also there’s an electromagnetic chair in the room, which holds Mid-Nite paralyzed long enough for the fake McNider to fool the cops into leaving. Myra deactivates the chair, and Mid-Nite unmasks “McNider” as Boss King, just before three henchmen run into the room. Mid-Nite loses this fight, and is knocked out for a second time in the same story.

Boss King also has a submarine, moored at a deserted pier on the bay. Having now successfully planted the idea of Doctor Mid-Nite’s insanity in the minds of the police (for the purpose of blaming him for this upcoming fake murder-suicide), he now ties Doc and Myra to the topside handrail of this vessel, and submerges it. Doctor Mid-Nite escapes (see “notes” below) and frees Myra, then treads water until the sub resurfaces, boards it, confronts Boss King, throws down a blackout bomb, and beats up King’s three gunmen plus Boss King.

Retrieved from "https://heykidscomics.fandom.com/wiki/All-American_Comics_Vol_1_95?oldid=1526662"
Community content is available under CC-BY-SA unless otherwise noted.