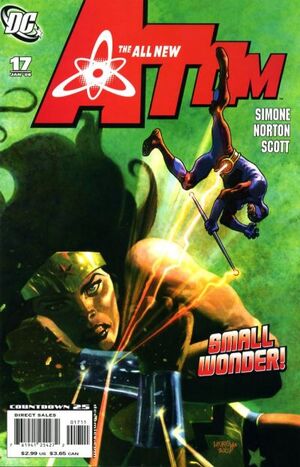 Don't take this the wrong way, but I often get the urge to crush you in my grip. With affection, though. Like a fatal hug. Endearing and enduring, at once. Feel your bones turn to powder just a little bit. Yum.

Appearing in "The Atom & the Amazon"Edit

Synopsis for "The Atom & the Amazon"Edit

During class, the students ask Professor Choi if he is really the Atom. He manages to evade the question until after class when Professor Zuel asks him out on a date. Later, a strange villain with a conjoined twin on his chest manipulates the mind of Professor Potter, urging him to kill Ryan Choi. When he gets home, Ryan finds Department of Metahuman Affairs agent Diana Prince waiting for him. She knows about Ryan's date with Professor "Giganta" Zuel and wants him to wear a wire. During the date, Ryan feels guilty for wearing the wire, and has no real desire to betray Giganta. Zuel soon discovers the truth and a fight breaks out. Both Ryan and Diana change into their heroic identities of the Atom and Wonder Woman. Diana takes Giganta down with one punch. Meanwhile, Diana's colleague Tom Tresser reports back to their boss, Sarge Steel. He recommends placing all of Ivy Town under quarantine.

Retrieved from "https://heykidscomics.fandom.com/wiki/All-New_Atom_Vol_1_17?oldid=1517437"
Community content is available under CC-BY-SA unless otherwise noted.