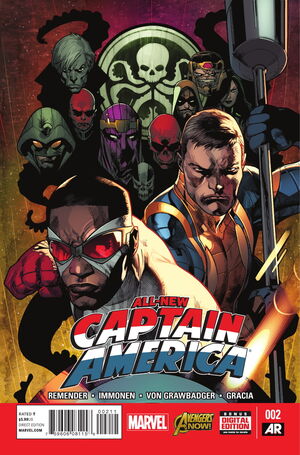 Putting a lot of trust in you, Sam Wilson. I'm the only one who knows-- not even my S.H.I.E.L.D. handlers have been told. Hydra's infiltrated everyone. Flipped someone in every one of your super hero teams. The Avengers, the Inhumans, the X-Men-- Everyone. The things I'm hearing on the stream-- The thing's they've already accomplished. Sam, the war was over before anyone knew it began... Hydra's already won.

• The new Hydra has formed, comprised of the most ruthless villains of the Marvel Universe as the great infiltration continues!

• Cap uncovers the ultimate goal of the new Hydra but is it too late to stop them?

• Cap and Nomad’s new partnership is put to the ultimate test as they race to uncover The Sect of the Unknown!

Retrieved from "https://heykidscomics.fandom.com/wiki/All-New_Captain_America_Vol_1_2?oldid=1514109"
Community content is available under CC-BY-SA unless otherwise noted.