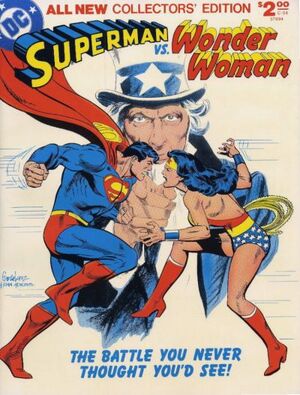 Appearing in "Superman vs. Wonder Woman"Edit

Synopsis for "Superman vs. Wonder Woman"Edit

In june, 1942, Superman saves a U.S. aircraft carrier in the Pacific from an attack by a Japanese submarine and a fleet of Japanese Zeroes. Then Superman asks the Admiral about the Manhattan Project. The Admiral then has Superman meet with the Secretary of War for more information. Wonder Woman stops a group of Nazi Suicide bombers from kidnapping a scientist, then stops their leaders when they assault Albert Einstein. When she tries to explain it to her boss, he says the FBI deny anything like that happened. Doing more digging on her own, Diana discovers the agent and the professor are working on something called "Project Manhattan." As instructed by the Emperor of Japan, Sumo the Samurai joins Baron Blitzkrieg in interrogating a captured United States scientist about the Manhattan Project. As Yeoman Diana Prince, Wonder Woman breaks into a vault in the War Department and steals a file on the Manhattan Project. She is horrified at what she reads and seeks counsel from her mother on Paradise Island. As Clark and Lois return from Midway to finish their story, Perry tells them that Chicago is being attacked by Wonder Woman! Superman flies to Chicago to reason with Wonder Woman, but she decided to eliminate all nuclear weapons no matter who gets in her way. As they battle, they realize that fighting in the city will just get someone hurt. They decide to continue their battle on the moon. Simultaneously, the Baron is poised to attack the Manhattan Project research center in Oak Ridge, Tennessee while Sumo gets ready to attack the Manhattan Project research center in Los Alamos, New Mexico. Both are stealing the two halves of a nuclear reactor. Realizing that Earth is trouble, Superman and Wonder Woman cease their battle and return to Earth. There they split up to find the 2 halves of the reactor: Wonder Woman faces Sumo in Japan and Superman hunts down Baron Blitzkrieg. The two heroes defeat the villains and bring them and the 2 halves of the reactor to a small island. Using his powers, the Baron activates the two halves. When Superman tries to look at it with his x-ray vision, the reactor becomes an atomic bomb. Both Sumo and the Baron fight each other for the weapon and both supposedly perish when it detonates. The heroes return to Washington D.C. where President Roosevelt assures both heroes that the United States would never use the bomb to kill anyone. Satisfied, the heroes take their leave.

Retrieved from "https://heykidscomics.fandom.com/wiki/All-New_Collectors%27_Edition_Vol_1_C-54?oldid=1409170"
Community content is available under CC-BY-SA unless otherwise noted.