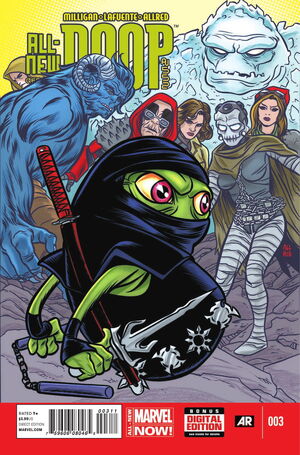 Yo, Doop. I heard your distress call.

• Behind the scenes and beyond the margins of Battle for the Atom, Doop’s unrequited love for Kitty continues unabated, forcing the little green guy to drag Bobby Drake into Doopland for some highly unusual questioning.

• Doop discovers that Raze is not really future Kitty Pryde.

• But the shapey-shapeshifter has a VERY dark secret that just might stop Doop from telling the other X-Men the truth about his identity.

Retrieved from "https://heykidscomics.fandom.com/wiki/All-New_Doop_Vol_1_3?oldid=1430735"
Community content is available under CC-BY-SA unless otherwise noted.