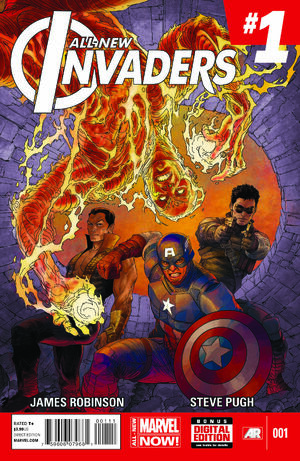 “GODS AND SOLDIERS” PART ONE

• The KREE EMPIRE intends to conquer the universe using a weapon that will grant them an army of NORSE GODS.

• It falls to four heroes united by their past—CAPTAIN AMERICA, NAMOR, THE ORIGINAL HUMAN TORCH and the WINTER SOLDIER—who must now face the future and wage war against the Kree to save Earth.

Retrieved from "https://heykidscomics.fandom.com/wiki/All-New_Invaders_Vol_1_1?oldid=1657733"
Community content is available under CC-BY-SA unless otherwise noted.