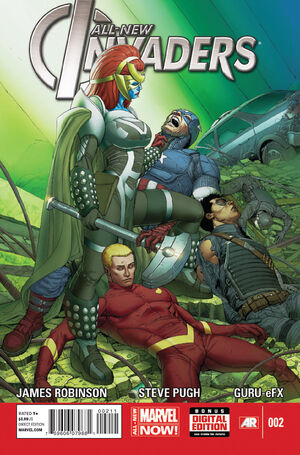 • As the ORIGINAL HUMAN TORCH decides to rejoin the human race, he and his fellow INVADERS face the savage fury of Kree’s ultimate hunter, TANALTH THE PURSUER! How can they beat a threat that seems unbeatable?

• And what is the desperate measure the Invaders decide to save their teammate NAMOR from the clutches of the SUPREME INTELLIGENCE?

Retrieved from "https://heykidscomics.fandom.com/wiki/All-New_Invaders_Vol_1_2?oldid=1640645"
Community content is available under CC-BY-SA unless otherwise noted.