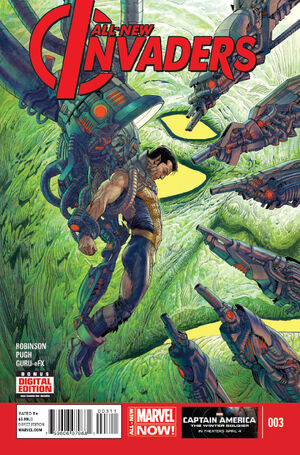 • The plans are drawn, the task is clear -- to save their ally NAMOR, the remaining INVADERS must live up to their name and take the fight to Hala, the Kree homeworld!

• But his how does AARKUS, THE ORIGINAL VISION, figure into this strategy? And how will the WINTER SOLDIER track him down in the first place?

• Plus, Namor in battle with Tanalth and her elite Pursuer Corps!

• And a guest star no one will expect -- especially not the Invaders themselves!

Retrieved from "https://heykidscomics.fandom.com/wiki/All-New_Invaders_Vol_1_3?oldid=1640646"
Community content is available under CC-BY-SA unless otherwise noted.