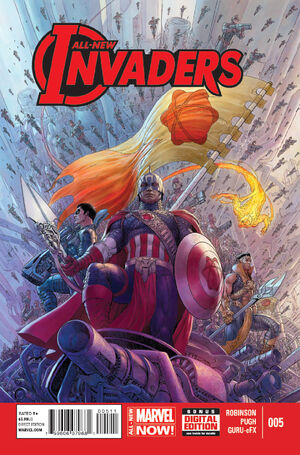 THE WORLD-SHATTERING CONCLUSION TO “GODS AND SOLDIERS”!!!

• The INVADERS are trapped on a hostile world and under relentless attack from a mind-controlled god.

• Facing a fate worse than defeat, will CAPTAIN AMERICA, NAMOR, THE HUMAN TORCH and WINTER SOLDIER become the means for the KREE EMPIRE to conquer the galaxy?!

• What role does one of the MARVEL UNIVERSE’S most powerful races play in this grand finale?

Retrieved from "https://heykidscomics.fandom.com/wiki/All-New_Invaders_Vol_1_5?oldid=1657734"
Community content is available under CC-BY-SA unless otherwise noted.