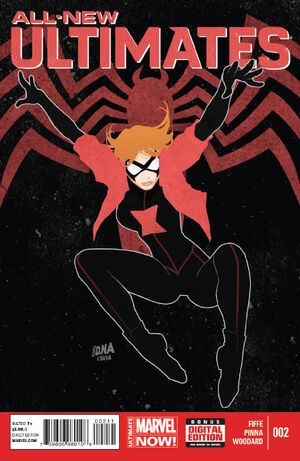 I had such hopes for that kid... she up and quits?

THE NEXT GENERATION OF ULTIMATES!

• The YOUNG ULTIMATES are put to the test as they try to survive their first mission: going head to head with the city’s most ruthless gang, the SERPENT SKULLS.

• KITTY PRYDE takes the bait and finally joins the team in an effort to push back the unrelenting wave of brutality.

• Jessica Drew takes on the mantle of BLACK WIDOW!!!

Retrieved from "https://heykidscomics.fandom.com/wiki/All-New_Ultimates_Vol_1_2?oldid=1408963"
Community content is available under CC-BY-SA unless otherwise noted.