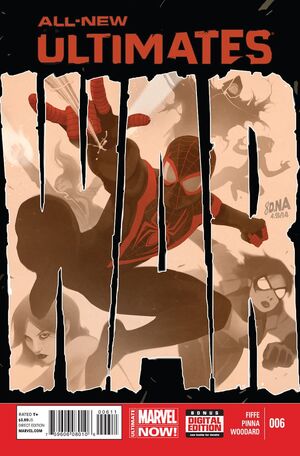 THE CLIMACTIC CONCLUSION OF "POWER FOR POWER"

• The ULTIMATES' battle with the SERPENT SKULLS! Fever pitch violence drives this war between the classes & sexes.

• DIAMONDBACK breaks hearts and faces! SCOURGE goes out in a blaze of glory! CROSSBONES fights to the bitter end!

• Will the team quit while they're ahead? Or will they emerge as something even STRONGER?!

Retrieved from "https://heykidscomics.fandom.com/wiki/All-New_Ultimates_Vol_1_6?oldid=1408974"
Community content is available under CC-BY-SA unless otherwise noted.