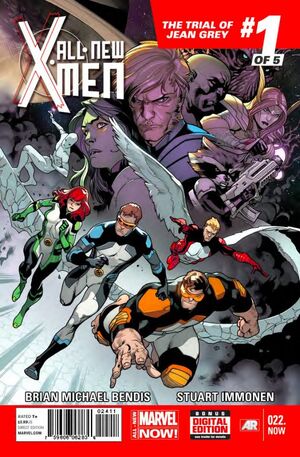 Appearing in "The Trial of Jean Grey: Part 1 of 6"Edit

“The Trial of Jean Grey”

The arrival of the original X-Men in the present sent shockwaves through the Marvel Universe, but we’ve only seen the effects on Earth. When alien races learn that Jean Grey, host of the destructive Phoenix Force, is back on earth, they do something about it. Now it’s up to the rest of the All-New X-Men and the Guardians of the Galaxy to save Jean Grey from twisted intergalactic justice! Don’t miss two of Marvel’s biggest franchises crossing over for the first time!

Retrieved from "https://heykidscomics.fandom.com/wiki/All-New_X-Men_Vol_1_22.NOW?oldid=1730862"
Community content is available under CC-BY-SA unless otherwise noted.