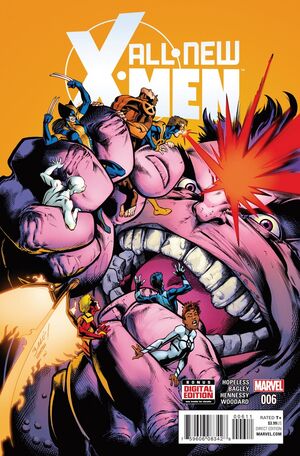 • In the wake of terrible acts committed by the adult Cyclops, mutantkind is hated and feared more than ever.

• And try as he might to divorce himself from his predecessor’s legacy, some believe that the young Scott Summers is destined to grow up and commit those sins.

• Now, there’s one mutant who believes that he can spare mutantkind if he prevents Scott from becoming that man.

Retrieved from "https://heykidscomics.fandom.com/wiki/All-New_X-Men_Vol_2_6?oldid=1643377"
Community content is available under CC-BY-SA unless otherwise noted.