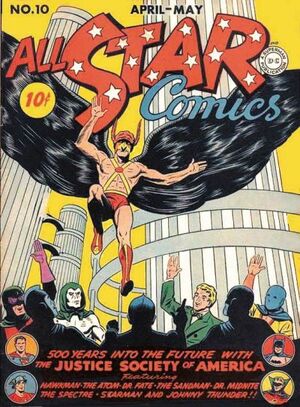 Appearing in "The Case of the Bomb Defense Formula"Edit

Synopsis for "The Case of the Bomb Defense Formula"Edit

The Justice Society rescues three American scientists from four enemy agents, learn that the braintrust is working on a device to protect the United States and its allies against bombing, and appoint themselves the scientists' guardians. When Johnny Thunder learns that one of the savants, Professor Everson, has already perfected a time-travel ray, the heroes travel to the Earth of 2442, feeling that the bomb defense formula must have been perfected by then, and attempt to bring it back. Hawkman is thrown into a mental hospital by the superstrong cops who do not believe he is Hawkman, but breaks out and learns from a televisabrary the location of various parts. He knocks out a Future Cop and takes the first one. Most of the other members are not believed as to their identity by the Future beings. Sandman goes down the mines, Starman into a city built atop giant trees, Dr Fate to a new Atlantis built beneath the ocean, Dr Mid-Nite performs an operation in utter darkness at a lush resort in the Sahara to establish his identity and gains access to his portion of the formula, and Atom goes to Sky City, home of giants who put him in a bird cage before he flies away with his share. Johny Thunder meets the Defenders, a futuristic police force who recognize him and try to enlist his help in catching the criminal Black Butch, which the Thunderbolt is able to do, and he gets back with his segment. The Society return to 1942 and a force field is created to protect America.

Retrieved from "https://heykidscomics.fandom.com/wiki/All-Star_Comics_Vol_1_10?oldid=1387044"
Community content is available under CC-BY-SA unless otherwise noted.