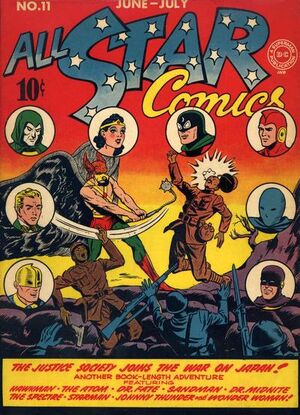 Appearing in "The JSA Joins the War on Japan"Edit

Synopsis for "The JSA Joins the War on Japan"Edit

Following the Japanese attack on Pearl Harbor, the active Justice Society members (except for the Spectre, who is a ghost), join the U.S. armed forces in their civilian identities, but are each forced to assume their superheroic identities to fight Japanese forces.

Retrieved from "https://heykidscomics.fandom.com/wiki/All-Star_Comics_Vol_1_11?oldid=1390157"
Community content is available under CC-BY-SA unless otherwise noted.