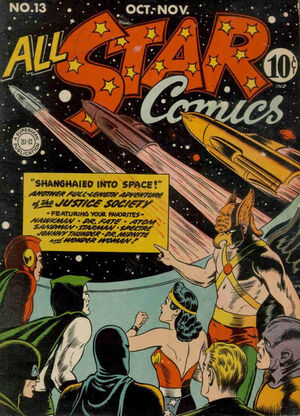 Appearing in "Shanghaied into Space"Edit

Synopsis for "Shanghaied into Space"Edit

To remove the Justice Society of America as obstacles, Adolf Hitler has his scientist aide Hans Gootsden rocket them individually to eight planets in a parallel solar system, on each of which they help the natives deal with menaces to their worlds.

Retrieved from "https://heykidscomics.fandom.com/wiki/All-Star_Comics_Vol_1_13?oldid=1401020"
Community content is available under CC-BY-SA unless otherwise noted.