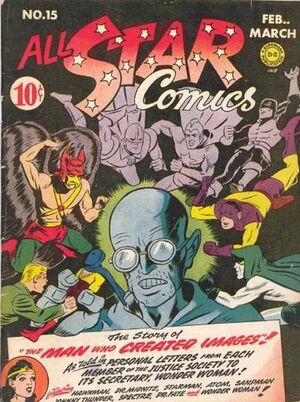 Appearing in "The Man Who Created Images"Edit

Synopsis for "The Man Who Created Images"Edit

Henry King, outcast of society, finds he has the power to create three-dimensional images of whatever person or persons he thinks of and becomes the Brain Wave, master criminal and ruler of a network of frightened gangsters. The individual Justice Society members, fighting different gangs, soon discover his hand behind each of them.Intrigued by the arrival of costumed interference in Elba's plans, the Brain Wave approached the JSA in his role as psychiatrist Dr. Henry King. Planting a post-hypnotic suggestion in the minds of the heroes, he lured them to the former World's Fair perisphere. There he attached the heroes (minus Green Lantern) and new arrival Wonder Woman to a mental device and bombarded them with images of wartime conflict (derived originally from tales in All-Star Comics #11). Not satisfied with the Justice Society, the Brain Wave baited the All-Star Squadron by using the lights of the World's Fair's trylon tower to send an ultimatum in Morse Code. When the heroes arrived, the Brain Wave insisted they join the JSA in his device or the more familiar heroes would die. Brain Wave's plans were ultimately thwarted by the arrival of the Green Lantern. When pulled into the criminal's nightmare scenario, Green Lantern willed his power ring to destroy what he perceived as the nation of Japan. The use of the full power of his ring elicited a powerful feedback from Brain Wave's machine, destroying it. The Brain Wave retreats to fight another day.

Retrieved from "https://heykidscomics.fandom.com/wiki/All-Star_Comics_Vol_1_15?oldid=1477834"
Community content is available under CC-BY-SA unless otherwise noted.