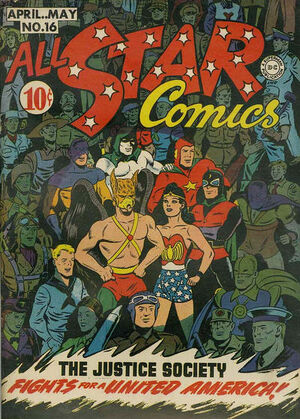 Appearing in "The JSA Fights for a United America"Edit

Synopsis for "The JSA Fights for a United America"Edit

Trying the age-old tactic of "divide and conquer", Adolf Hitler sends several of his handpicked agents into America to incite racial, religious, and class hatred and to weaken the country for his gain. Hawkman stumbles onto the plot and sends the other JSA members to trouble spots.

Retrieved from "https://heykidscomics.fandom.com/wiki/All-Star_Comics_Vol_1_16?oldid=1489422"
Community content is available under CC-BY-SA unless otherwise noted.