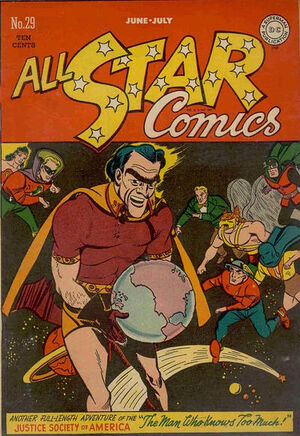 Appearing in "The Man Who Knows Too Much"Edit

Synopsis for "The Man Who Knows Too Much"Edit

Landor, a man from the year 2414, has been stranded in the 20th Century by a defective time machine and uses his future knowledge to make deadly devices from commonplace objects. He challenges the Justice Society to stop him at six different places.

Retrieved from "https://heykidscomics.fandom.com/wiki/All-Star_Comics_Vol_1_29?oldid=1531609"
Community content is available under CC-BY-SA unless otherwise noted.