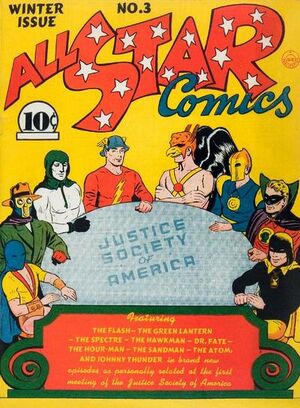 Eight super-heroes gather together at a secret location for the first official meeting of the Justice Society of America. Johnny Thunder decides to crash the party and with the unwitting aid of his magic Thunderbolt, brings all of the heroes together much more quickly than they originally intended. Johnny suggests that they should each tell the tale of their most exciting adventure.

Flash
Jay Garrick and Joan Williams are having dinner at a New York restaurant when a woman named Mary Rogers approaches them. She tells the couple that her father, treasure-hunter Tim Rogers, has been searching for a legendary sunken ship called the Sancta Joanna. She is concerned however, because pirates from a rival ship called the Nancy K, have been trying to sabotage her father’s efforts.

Jay sneak off to change into the Flash and races off to the Panama coast to investigate the scene. Streaking through the water like a torpedo, he manages to find the sunken ruins of the ship. After evading the jaws of a hungry shark, Flash introduces himself to Tim Rogers, who subsequently tells him about the pirates of the Nancy K.

Flash swims after the Nancy K, and uses his super-speed as a makeshift propeller in order to steer the ship off course. Boarding the vessel, he races around the deck confounding the efforts of the armed pirates. He then aims the Nancy K on a direct course for an iceberg.

Returning to Rogers' ship, the Flash aids the man in securing the gold from the hull of the Sancta Joanna.

Hawkman
Carter Hall and Shiera Sanders attend a science expedition in New York. Shiera learns about a strange volcanic phenomenon taking place on the island of Krakatao. She decides to investigate the affair despite Carter's protestations. Concerned that Shiera may be placing herself in danger, he decides to follow her in the guise of Hawkman.

When they arrive at Krakatao, they discover that the interior of the volcano is populated with men calling themselves Fire Ghosts. Hawkman notes that the alleged Fire Ghosts are coated with a strange material, which renders them invulnerable to the effects of the flames. The Fire Ghosts capture Hawkman and Shiera and bring them deeper into the volcano to the lair of Mazda – the sorcerer. Mazda reveals that he is actually a scientist who has developed a force generator that harnesses pockets of hot steam from the volcano, transforming it into pure force. With this technology, Mazda plans on taking over the world.

Hawkman breaks free and wrestles with Mazda. He flips him backwards into the magma pits killing him. Hawkman then brings Shiera back to her hotel room.

Spectre
During the nights of the full moon, a mysterious shadowy figure prowls the streets of New York taking random lives. A guard from the Central Building is found dead, the apparent victim of strangulation. The police commissioner assigns Jim Corrigan to the case, demanding that he find the killer as soon as possible. Corrigan returns to the Central Building where he notices the presence of a strange brass gargoyle that had not been present on previous occasions. The gargoyle leaps down from its pedestal, declaring itself as Oom – a monster that had spent thousands of years trapped on the moon. Now that he is free, he pledges to kill as many people as possible.

Oom attacks Corrigan, who quickly alters his appearance to that of the Spectre. Oom challenges the Spectre, declaring that the first person to locate the fabled Red Moon Stone of Yzgartyl will have earned the right to remain on the Earth. The loser must agree to abandon the planet forever.

The Spectre and Oom travel through outer space in search of the Moon Stone. Oom attempts to slow the Spectre down through the aid of one of Yzgartyl's henchmen. The crony in question, a large brown space-dragon, battles with the Spectre while Oom takes the opportunity to find the Moon Stone. The Spectre succeeds in getting the stone away from Oom and returning to Earth, thus winning the contest. Oom however, refuses to return to his former imprisonment. The Spectre uses his unlimited power to pull Oom's soul from his body, trapping it inside the Moon Stone. He then hurls it out into deep space.

Hourman
Mister Bannermain informs Rex Tyler that he wants him to attend the Durant charity costume ball with his niece, Regina Paige. Rex decides go to the function dressed as Hourman. When he arrives, he sees five other guests also dressed as Hourman. He learns that the other Hourmen plan on stealing the Durant diamond collection and pinning the job on the real Hour Man. Rex takes some Miraclo and gets into a fight with the imitators, but one of them knocks him down from behind with the butt end of his gun.

When he awakens, he discovers that the thieves are gone. He sneaks into Durant's study where he finds evidence indicating that Durant is the ringleader of his own robbery. In need of fast money, he staged the robbery so that he could collect on the insurance money.

Hourman tracks down the thieves and apprehends all five men. He then exposes Durant's fraud and the police arrive to arrest everyone.

Sandman
Wesley Dodds and Dian Belmont are driving through the country when suddenly they come upon a twenty-foot unconscious man. Unable to do anything about it, they return to the city, where Wes begins investigating the extraordinary case as the Sandman. He sneaks into the medical offices of a nearby hospital where he discovers that a doctor named Faversham lost his medical license for performing illegal experiments involving pituitary disorders on mice. Hospital security guards burst into the room, and the Sandman is forced to escape out the window.

He continues following the trail with Dian. Along the side of the road, they find a a giant-sized cat chasing a giant-sized rat. After romping around for several moments, both animals fall over dead. The Sandman concludes that both animals were experiments of Dr. Faversham.

The Sandman finds an old country house, and enters the cellar. In the darkened room, he finds a man strapped to a laboratory table. The man explains that Faversham has been kidnapping men and transforming them into giants. However, the effects are only temporary and ultimately fatal. Faversham sneaks up behind the Sandman and tries to kill him, but Wes manages to knock him out with a right cross.

Doctor Fate
Inza Cramer is shopping at an old antique store in Salem when she meets a strange woman. The woman sells her a small brown box, which she claims comes from Samathrace – Home of the Ancient Mysteries. Inza accepts the box, and in a moment, the strange woman disappears. Inza returns to her apartment and opens the box. The box emits a strange gas, which renders Inza unconscious. The image of the mystery woman appears in her dreams, instructing her to find Doctor Fate.

Inza awakens and rushes to Fate's tower. As he greets her, an army of the Egyptian undead rises from the ground and attacks them. Doctor Fate grabs Inza and flies off. He catches a whiff of her perfume and recognizes the scent as Chevegris – an opiate used for magical effect. Someone has deliberately poisoned Inza as means of getting to Fate. Doctor Fate brings her back to her apartment, where he places her in a deep sleep. He then flies off in search of the beings responsible for this attack.

Doctor Fate finds that an amateur wizard has acquired a tome, which allows him to pull nightmares directly from a victim’s psyche. Fate fights up against several phantasms including, a giant octopus, the Witches of Endor, and a herd of maddened unicorns. Piercing the wizard's force shield, Doctor Fate brings him down using old-fashioned martial arts, the wizard dies as his neck is broken. Doctor Fate then opens a rift and banishes the wizard from Earth for eternity, in case he reincarnates someday.

Atom
Al Pratt is on a geology field trip at Calvin College when he notices an armored car robbery on a desolate stretch of road. Changing into the Atom, he attempts to leap on top of the hijacked vehicle, but slips from the roof and falls to the ground. Fellow student Mary James comes upon him, and Al revives just in time to prevent Mary from removing his mask.

The Atom is back on the case, and tracks the criminals down. He follows the stolen armored car to an airstrip, where they hijackers are preparing to load $20,000,000 dollars in gold bars onto an airplane. Bursting onto the scene, the Atom dives into the thugs and quickly overpowers them. Mary James arrives at the scene with the police to take the men away.

Green Lantern
As crime runs rampant throughout the city, citizens begin to look towards Commissioner Mason for guidance. However, a political opportunist named Lacy manipulates events to get Mason out of office. He arranges it so that it appears that Mason is accepting graft, and has him exposed. To fill the vacuum, Lacy is appointed as the new police commissioner. Lacy maintains all of the city’s racketeering outfits, but manages to keep a low profile on everything.

Alan Scott learns of the affair and decides to investigate as Green Lantern. He consults with an investigative journalist named Paul Pryer and together they plan to expose Lacy. Lacy sends his goons to kill Pryer, but the Green Lantern whisks him away to safety.

Lacy's henchman, Ape, manages to render Alan unconscious with a wooden club, but the Green Lantern quickly revives and escapes. He flies after Lacy who is preparing to kill Paul Pryer. Using the power of his ring, he traps the corrupt police commissioner and hypnotically forces him to publicly reveal how he framed Commissioner Mason.

Appearing in "Guarding an Heiress"Edit

Synopsis for "Guarding an Heiress"Edit

Johnny Thunder pays a visit to Daisy Darling only to find she is dating another man, Edgar Egwell, jealous Johnny forces his way to Daisy's house and while talking to Egwell he accidentally summons his Thunderbolt. Ignoring the fact that his wishes will be granted for one hour he ruins Daisy's and Edgar's date by turning the flowers he brought into poison ivy; feeling humiliated Daisy makes both men go away and an angry Edgar chases Johnny into the town. After escaping from Edgar,John is walking in town when he finds two men carrying a mannequin. He decides he could use it to practice how to treat Daisy, the men refuse to sell and Johnny, whose "magic hour" has not finished accidentally turns both men into windbags, then Johnny hears some cries and discovers that inside the mannequin was Theresa Drew a heiress that had been kidnapped by the thugs; after learning how his daughter was rescued Mr. Drew hires Johnny as Theresa's bodyguard. After sometime without incidents Johnny and Theresa are both kidnapped one day and they are taken to a hotel room, there Johnny discovers that the man planning Theresa's kidnapping is Edgar Egwell, once again accidentally summoning his Thunderbolt, Johnny turns Egwell into a snake, he and the terrified thugs run away only to find the police in the hotel lobby, the villains are arrested. When Johnny goes back to the room to find Theresa, he is surprised to see her all beaten up by Daisy Darling. She saw Johnny in trouble, called the cops and attacked Theresa to have Johnny back at her side.

Retrieved from "https://heykidscomics.fandom.com/wiki/All-Star_Comics_Vol_1_3?oldid=1519709"
Community content is available under CC-BY-SA unless otherwise noted.