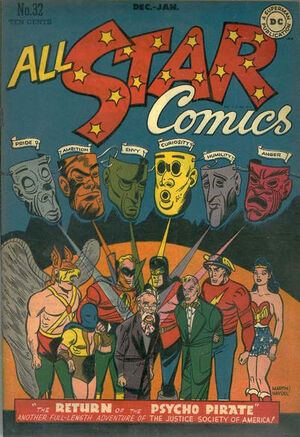 Appearing in "The Return of the Psycho Pirate"Edit

Synopsis for "The Return of the Psycho Pirate"Edit

The Psycho-Pirate is talked by his cellmate into breaking both of them out of jail by playing on the guard's emotions, then into helping him with a crime spree, which his cellmate challenges the Justice Society to stop.

Retrieved from "https://heykidscomics.fandom.com/wiki/All-Star_Comics_Vol_1_32?oldid=1531612"
Community content is available under CC-BY-SA unless otherwise noted.