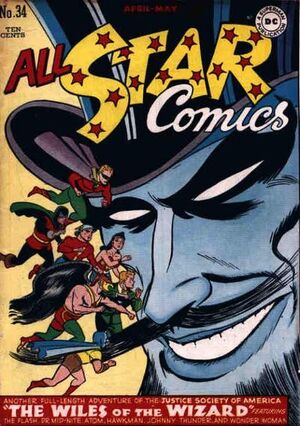 Appearing in "The Wiles of the Wizard!"Edit

Synopsis for "The Wiles of the Wizard!"Edit

The Wizard, a criminal super-magician, is convinced that the Justice Society is really a gang of criminals posing as heroes in order to pull off a colossal theft sometime in the future. When they protest that they have no such plans, he challenges them to prove their heroism by foiling five crimes which are soon to be committed.

Retrieved from "https://heykidscomics.fandom.com/wiki/All-Star_Comics_Vol_1_34?oldid=1531614"
Community content is available under CC-BY-SA unless otherwise noted.