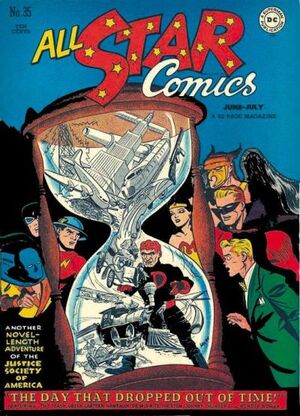 Appearing in "The Day That Dropped Out Of Time"Edit

Synopsis for "The Day That Dropped Out Of Time"Edit

Per Degaton steals the time cabinet of Professor Zee and causes Alexander the Great to lose the Battle of Arbela in 331 B.C., causing all modern inventions to vanish from the 20th Century. Using the Time Machine, Degaton travelled back to 331 B.C. and supplied the Persian sultan Darius with modern weapons with which to defeat Alexander the Great. With this battle altered, the timeline changed such that the growth of civilization is severely stunted. The 20th century reverts to medieval levels of technology and Degaton, who has been hiding in an arsenal outside the changed timeline, conquers America handily. Meanwhile, Zee has been found and moved to a hospital where he summons the JSA to his bedside. As he is about to reveal the event which he believe Degaton has altered, he is shot once more. The JSA sends several of it's members on reconnaissance missions to determine Degaton's origins and intentions. When they return Zee is well enough to talk and tells them of Degaton's interference in the Battle of Arbela. The JSA then use Green Lantern's ring to go back to that fated battle and use their powers to again turn the tide in Alexander's favor. Successful, the JSA return to their own time with only one of Alexander's shields as a memento. They themselves remember nothing, and learn only of the case through Wonder Woman's Magic Sphere But Green Lantern uses his ring to send himself and the other Justice Society members back in time to help Alexander win, and correct the flow of time.

Retrieved from "https://heykidscomics.fandom.com/wiki/All-Star_Comics_Vol_1_35?oldid=1531615"
Community content is available under CC-BY-SA unless otherwise noted.