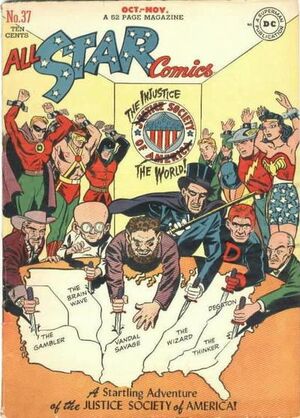 Appearing in "The Injustice Society of the World!"Edit

Synopsis for "The Injustice Society of the World!"Edit

The Wizard challenges the nation and the Justice Society by assembling an Injustice Society of the World and liberating convicts from prisons all over the country to join in an attempted coup against the government. Along with the Thinker, Vandal Savage, the Gambler, the Brain Wave and newcomer Per Degaton, the Wizard plans to launch a 3 pronged assault on the Justice Society. The first part of their plan is to generate an army of criminals by liberating American penitentiaries. The second requires disruption of the government and legal system through conquest and replacement of key figures with ISW-controlled androids. The final part is to capture and place on trial their collective enemy, the Justice Society of America. Fragmenting into individual efforts, the ISW launched strikes are government facilities around the nation, each with his own private army of convicts. In additional to furthering their primary aims, the villains were each assigned to capture a member of the JSA in anticipated resistance. To ensure that the JSA showed up, the villains notified the heroes of their plans. In due course, Hawkman was captured by Vandal Savage as the criminals attacked an airport. The Flash fell victim to his long-time foe, the Thinker by invisible . The Atom realized an army Officer was really an android duplicate and overpowered him. He freed the real Man, disguised himself as the android and found the ISW Headquarters, but was snared by the Gambler. Degaton was then ordered to attack Capital City. Mid-Nite fought against his safe-cracker army who were using smoke to hide their attack. He pursued Degaton, but was suddenly seized from behind and knocked out against a wall by Degaton, who then took control of the city. By the time Mid-Nite comes to he has been tied up. After an encounter at a government nuclear facility, the Brain Wave left the Green Lantern for dead at the bottom of a ravine. Hearing of Degaton's capture of Dr. Mid-Nite in Washington, Wonder Woman and Johnny Thunder left the JSA HQ to intervene, only to be captured themselves. Bringing the JSA to trial before Judge Thinker, the heroes are quickly convicted for plots against evil and sentenced to death. The villains are thwarted however, when the the Thinker is revealed to be the Green Lantern, not quite so dead as assumed by the over-confident Brain Wave. Quickly liberating his colleagues, the JSA turns the tide against the villains. All are handily captured save the Wizard, who flees into the street only to be captured by a group of children who idolize the Justice Society.

Retrieved from "https://heykidscomics.fandom.com/wiki/All-Star_Comics_Vol_1_37?oldid=1531617"
Community content is available under CC-BY-SA unless otherwise noted.