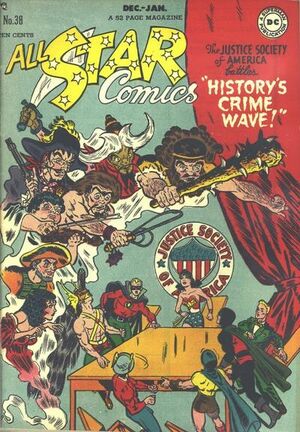 The Justice Society members try to figure out what is behind the spate of murders in Gotham City apparently committed by great villains of history, and are themselves killed one by one by the historical nemesis himself. At the trial of Sonia Gaye the famous concert Pianist she is accused of murdering her brother due to his violinist talent out of jealousy. She accuses the Emperor Nero of doing it, which the Court laughs at. Meanwhile Doctor Mid-Nite is running up the back steps when he encounters Nero, who strikes him with his Fiddle, causing him to fall over the banister to the floor below. Later at a wrestling match a policeman asks why Big Boy Nelson killed Little David in his wrestling room, suggesting it was out of fear he'd win his wrestling crown. He accuses Goliath, when asked if he means Goliath Johnson, who beat Bouncin' Bimbo at Pine Woods last week, he says he means the giant. The Policemen find it funny and take him away. Meanwhile in a cobwebbed room in a deserted house the Atom hears a locked door creaking. Suddenly Goliath breaks it down and strikes Atom with his club. Later in the harbor at the Van West Yacht a Policeman on a boat orders it to be driven to the Van West Yacht, hearing cries of help. When the Policemen get on they find a women holding a smoking gun next to a dead women. She says she didn't kill her sister and when a Policeman asks who did she says Capt. Kidd the Pirate. Th Policeman laugh as she says they must believe her. Meanwhile the Flash swims through the water, as he lifts himself out on a Pier he sees Captain Kidd, who shoots him, causing him to fall into the water. Later at Gem Rarities. Inc Mr Benson is accused of killing his partner, and says he won't be believed if he says who murdered him. He says it was Cesare Borgia. He is arrested. That evening Green Lantern opens the Vault with his ring. He is seized by Cesare Borgia who presses his poison ring against Green Lantern's mouth. Later on the Rex Theater Stage during a mock duel one of the men is killed. The audience accuse him of murder and the Police are called. The man proclaims his innocence and is asked to account for the sword wound, blood on his sword point, and the audience seeing him doing it. The man says he knows who committed the murder, It was Genghis Khan. The audience laughs and at that moment Hawkman alights on a nearby roof and Genghis Khan steps from behind a chimney. He murders Hawkman with his sword. In the Death House at Riverside Mary is told her reprive was denied, no new evidence has turned up, the execution will take place as scheduled. She says she's innocent, saying Attila the Hun killed her husband. As the man leaves shes swears she's innocent and says Attila struck Stephan down. At that moment Johnny Thunder drives through a covered bridge leading to the prison but a whip from Attila the Hun pulls him from his car. He is then struck by Attila's sword. Black Canary sees his wrecked car and finds Johnny, who before he dies tells Black Canary the JSA secrets. The Black Canary doesn't notice Attila behind her as she weeps at Johnny's death. She gets to the headquarters and meets Wonder Woman but collapses. When revived she tells what happened, saying Attila thought he killed her but only wounded her. Wonder Woman then retrieves the JSA's bodies. The bodies are taken to Paradise Island by Wonder Woman, and revived by Paula Von Gunther using the Purple healing ray. The JSA at once go looking for their Killers, and enter a Wax Museum, where a guard tells them the villains are merely Wax figures, showing an exhibit of Greatest Villains Of All Time. Green Lantern tells what happened, the Justice Society recently went to the Museum and said the Historical villains wouldn't stand against modern methods. Soon after they received letters telling them to go to various locations to meet the historical figures. They take the letters out but they disappear. Black Canary gives them an idea. In the newspaper it claims the Justice Society has caught crooks impersonating Historical villains, who will reenact their crimes. At each crime scene the villain starts reenacting the crime, but the real villains appear. Each original villain reveals themselves as the Justice Society member that villain killed. The villains use gas and exploding wax figures of themselves to capture the JSA, who come to on a platform in a vat of hot wax, with wax pouring over them, Green Lantern's ring has run out of power, the Flash can't vibrate free, and Hawkman's wings are covered in wax. They see the villains watching this, then Attila reveals himself as the Museum Guard. He reveals he impersonated all the villains, angry at the JSA insulting them, he sent chemically-treated letters that disappeared and now plans to turn the JSA into wax exhibits. The JSA think he must be insane. Suddenly the model of Lucrezia Borgia tells the Guard to free the JSA, he raises the platform with them on out of the vat. However the heat causes the wax mask of Lucrezia to melt, revealing Black Canary. The guard tries to throw her into a vat. The Black Canary falls over her dress, but he falls in himself and is killed. The Canary frees Flash with a hammer who frees the others. She reveals she followed Johnny Thunder and when he was captured followed the villain to the Wax Museum. The JSA hear what happened, and hope Black Canary one day becomes a member.

Retrieved from "https://heykidscomics.fandom.com/wiki/All-Star_Comics_Vol_1_38?oldid=1531618"
Community content is available under CC-BY-SA unless otherwise noted.