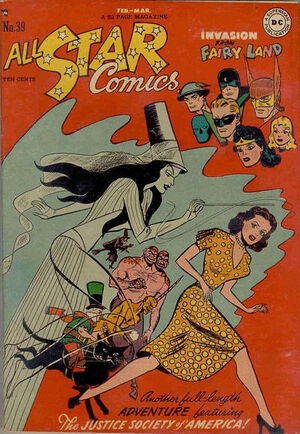 Appearing in "The Invasion From Fairyland!"Edit

Synopsis for "The Invasion From Fairyland!"Edit

When a woman gains the magical power to make her voiced wishes come true and accidentally kills her boss with it, she appeals to the Justice Society for help. The heroes find a secret entrance to Fairyland, and try to overthrow the Lorelei who rules it tyrannically. The Slicer was a notorious hoodlum who was held for a time in a jail cell next to one Sally Barnes, a young woman who had been given some of the powers of a magical entity called The Loreli, the ruler of an extradimensional Fairyland. The Slicer escaped jail and followed the Justice Society of America (who were investigating the case) to Fairyland, hoping to obtain the 'Voice of the Loreli' for himslf. He ingratiated himself with the Loreli and persuaded her that she should team up with him to loot the outer world, but once the Loreli felt that he had outlived his usefulness and that his ambition could be a threat to her, she magically transformed him into a dog and turned him loose back on Earth.