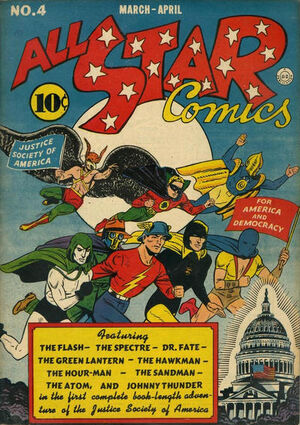 For America, Justice Society Members! For America and Democracy

Appearing in "For America and Democracy!"Edit

Synopsis for "For America and Democracy!"Edit

At the request of the Chief of the F.B.I., the members of the Justice Society move against fifth columnists, who seek to destroy America from within on behalf of the Axis powers. These hidden enemies are directed by spy-master Fritz Klaver, leader of the Grey Shirts, a Bund organization. The Flash stops the Grey Shirt activity in Michigan, while Green Lantern battles the Baron and his radio-jamming dirigible. The Spectre stops sabotage at a Pittsburgh munitions factory, Hourman exposes evildoing at the Oklahoma oil fields, and Dr. Fate uncovers a sabotage plot at the Boston Navy Yard. Sandman shields an anti-Axis newspaper editor in El Paso from Grey Shirt attacks, while Hawkman foils fifth columnists who seek to destroy a Flying Fortress, and the Atom stops student subversion at Tri-State College. Then, after learning that Klaver is based in Toledo, Ohio, where the Atom and Johnny Thunder have already been taken captive, the heroes apprehend the master manipulator and his closest aides, while Johnny Thunder's Thunderbolt deposits Klaver's house, with the heroes and villains inside, outside F.B.I. headquarters in Washington, D.C.

Appearing in "A Fortune Teller's Fortune"Edit

Synopsis for "A Fortune Teller's Fortune"Edit

On her way to a birthday party Daisy Darling asks her companion, Johnny Thunder, to have her fortune told and so despite Johnny's reluctance they visit to Mogi the Marvelous, while Daisy's fortune is told Johnny gets angry when Mogi tells the girl she is going to find a tall and handsome stranger, while arging with the magician Johnny accidentally says his magic words and so he summons his Thunderbolt. Mogi says to Daisy that he cannot continue with the reading as long as Johnny is in the room, since he is a disbeliever his powers won't work unless he leaves, wishing to have the rest of her fortune told Daisy asks Johnny to leave her. Once outside the room Johnny wishes he could see what was happening inside, and so the Thunderbolt makes the wall invisible, when this happens Johnny is able to see how Mogi hypnotizes Daisy, but when he tries to run to help her, he forgets he is watching her through the wall and knocks himself unconcious. When he wakes up he finds Daisy and Mogi and everything seems to be OK, confused Johnny leaves the place. Ten days after that Daisy discovers that her pearls necklace is missing and that in it's place there is a worthless imitation, Johnny remembers the fortune-teller and discovers that he must have stolen the pearls when he hypnotized her, he goes to confront Mogi and while they aare arguing he once again accidentally summons his Thunderbolt and with his help he defeats Mogi and finds Daisy necklace along with much other jewels inside the fortune-teller crystal ball.

Retrieved from "https://heykidscomics.fandom.com/wiki/All-Star_Comics_Vol_1_4?oldid=1519704"
Community content is available under CC-BY-SA unless otherwise noted.