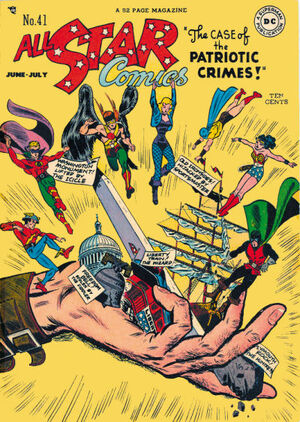 Appearing in "The Case of the Patriotic Crimes"Edit

Synopsis for "The Case of the Patriotic Crimes"Edit

The Wizard forms a new Injustice Society and, to determine which of them will be the leader, has them stage competitive thefts of American patriotic objects such as the Freedom Train, Plymouth Rock, Old Ironsides, and the Washington Monument. Not satisfied with the last outcome, the Wizard has abandoned his fellow members in prison and re-organized the Injustice Society a few months later with new, less megalomanical members including the Fiddler, the Icicle, the Sportsmaster, the Huntress and the Harlequin. After recruiting the Harlequin, the Injustice Society learned that Green Lantern's "enemy" had no intention of joining the group. Instead, they learned from a diary she dropped, she intended to betray them. Followed covertly by the Sportsmaster, the Harlequin alerted the JSA to the villains' plan only to be felled with the heroes when the Sportsmaster launched a grenade in the form of a lacrosse ball.

The Harlequin was thrown under a table by the blast and went undetected as the Sportsmaster lugged the JSA members out to captivity. When the Black Canary arrived later for membership induction, she found the ersatz villainess and together, the two were ambushed by the Icicle. Taken back to the Injustice Society headquarters, the two found the JSA brainwashed and working as slaves for the villains. Before they could join their comrades in slavery, the Black Canary revived the JSA and each member set off in pursuit of the individual ISW members, each of whom had targeted a national monument to steal. Unfortunately, the heroes had been subject to a post-hypnotic suggestion that would return them to a mindless state when they heard the snap of fingers. As each intercepted their target, the villains handily re-captured them and carted the heroes and the monuments back to their lair.

To determine who had committed the best theft, the villains planned to ask a large crowd of captured Americans to judge them. To make sure the JSA was no longer a threat, they were dropped in their automaton state into a deep mine shaft along with the recaptured Harlequin and Black Canary. Trapped in the bowels of the earth, the heroines worked feverishly to convince the JSA of their true identities. With constant urging, the two convinced Green Lantern to employ his ring, freeing the JSA from their stupor. The team then rocketed up the shaft and confronted the ISW, who had reached a murderous level of frustration with their captive judges. Surprising the villains, the heroes quickly rounded up the team. The ISW was deposited in jail and Black Canary was then inducted into the Justice Society

Retrieved from "https://heykidscomics.fandom.com/wiki/All-Star_Comics_Vol_1_41?oldid=1532066"
Community content is available under CC-BY-SA unless otherwise noted.