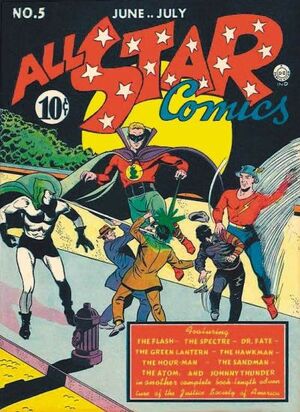 Appearing in "The Mysterious Mister X"Edit

Synopsis for "The Mysterious Mister X"Edit

Mister X, the mysterious mastermind of a large American crime syndicate, sends the various gangs at his command in an aggressive operation against the individual Justice Society members.

Appearing in "Johnny On The Spot"Edit

Synopsis for "Johnny On The Spot"Edit

Johnny Thunder gets a new job as an elevator boy in the building where Herman Darling works, one day two gunmen, Joe "The Butcher" and "Small Change" arrive to the building to pay a visit to Mr. Darling; Johnny refuses to take them to the floor in which the man leaves, but while this is happening Daisy Darling arrives and she tells Johnny to take her to her father's floor, unable to do anything Johnny takes her there and the two gunmen follow her into her father office, back in the elevator Johnny accidentally says his magic word summoning his Thunderbolt, while he is in his "magic hour" Johnny discovers that the gunmen have been sent by Commissioner Darcy, who wants to get a rake-off from Darling, Johnny prevents Mr. Darling being shot and orders the two gunmen to walk into the elevator with him, compelled to comply by the Thunderbolt, the two villains do as they are told, but once inside the elevator Johnny is knocked unconscious and he is left at the bottom of the elevator. The gunmen return to the office and they capture the Darlings. Daisy Darling is left bound and gagged along with her father in the elevator and then the two gunmen cut the cable so they both will die when it crashes down, crushing Johnny in the meantime. Fortunately Johnny wakes up just in time, and as his magic hour isn't over yet he orders the elevator to stop, when he goes up again he finds that the police has arrived, and they have rescued Daisy and her father, so using his Thunderbolt once again Johnny finds the two gunmen who were hiding, and they are arrested,and also Commissioner Darcy is exposed.

Shiera Sanders for the first time dons Hawkman's costume with some changes in design.

Retrieved from "https://heykidscomics.fandom.com/wiki/All-Star_Comics_Vol_1_5?oldid=1763538"
Community content is available under CC-BY-SA unless otherwise noted.