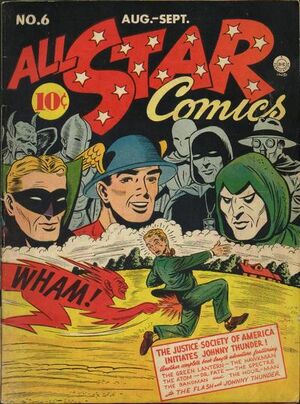 Appearing in "The Justice Society of America Initiates Johnny Thunder"Edit

Synopsis for "The Justice Society of America Initiates Johnny Thunder"Edit

With the Flash becoming an inactive JSA member to devote more time to his solo cases, Johnny Thunder crashes his going-away party and petitions to be allowed to join. The other members concoct their version of a snipe hunt, in which Johnny is to apprehend "Killer" McPanzee, ostensibly a dangerous criminal but in reality a rather timid old coot.

Charles McNider is in his library dictating an article to his assistant Myra Mason when he sees the killer "Snakey" Scarlatti through the window holding a gun and aiming at him, Scarlatti had been recently featured in one of the doctor's articles against the mob and he had written about him that he was a vicious animal lower than the common rat. Scarlatti was furious and wanted to kill Mcnider as a revenge. Mcnider didn't want to run out of the room in order to not reveal his secret identity as Doctor Mid-Nite to his assistant, neither did he want to suddenly turn off the lights as Myra could get hurt in the confusion. Finally McNider says out loud that he has found out in which place the "Guinness Mob" has hided a big quantity of diamonds, as that organization is the rival of Scarlatti's Carlo gang he lowers his gun wanting to listen where are that valuable diamonds. Once he has stopped the killer from shooting McNider asks Myra's to go to the public library to get him some books, saying that once he returns he will tell her about the diamonds, as the girl leaves and Scarlatti stays hidden in the garden to listen to McNider's story, the Doctor leaves the room, changes into Doctor Mid-Nite and taking his owl, Hooty, with him goes out to find Scarlatti, knocks him out and leaves him tied up, then he calls the police and once Myra comes back he is once again waiting for her as Charles McNider having stopped the killer and preserved his secret identity.

Retrieved from "https://heykidscomics.fandom.com/wiki/All-Star_Comics_Vol_1_6?oldid=1362688"
Community content is available under CC-BY-SA unless otherwise noted.