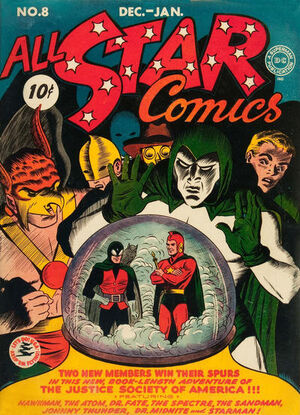 Chin up, and keep 'em flying!

Doctor Mid-Nite learns that a scientist named Professor Elba has developed an insanity serum that causes some men to believe they are animals. It causes other men to grow uncontrollably terrified of the light. Mid-Nite investigates the professor's lab and discovers a cure called Solution K. Armed with the antidote, he decides to seek out the aid of other heroes. He introduces himself to the Justice Society of America.

The JSA meanwhile, have been witnessing the effects of Professor Elba's handiwork. One by one, individual members of the team investigate various cases of racketeering and fraud, only to discover that their prime suspects are victims of Elba's Insanity Serum.

Doctor Mid-Nite learns that a former commissioner named John Graw had been turned insane due to Elba's formula, while Doctor Fate finds that a group of racketeers have used the serum to blackmail a bus owner named Bill Benson. The Atom becomes involved in a jewelry scam syndicate, which likewise leads back to Professor Elba's handiwork. The Sandman exposes a group of criminals who have been running a celebrity photograph racket, while Starman investigates two thugs attempting to blackmail a high-profile political figure. Hawkman and the Spectre becomes involved in similar criminal activities – only to find more evidence of Professor Elba's Insanity Serum hindering their respective efforts.

Johnny Thunder goes to the mansion of Oscar K. Doodle to ring a confession out of him for selling supplies of inadequate cement. While there, he runs afoul of Professor Elba who captures him. Johnny instructs his Thunderbolt to bring the entire JSA to his aid. When they arrive, Professor Elba attacks Oscar Doodle with his serum, but Dr. Mid-Nite deflects the evil scientist's blow. The needle jabs itself into Elba's own arm, and he falls backwards out an upstairs window to his doom.

With the threat of Professor Elba behind them, the JSA welcome their two new members – Doctor Mid-Nite and Starman. Johnny Thunder names Hooty the Owl as the team's official mascot.

Hop Harrigan's partner, Tank Tinker, assumes the guise of Super-Duper Man and decides to perform several dangerous aerial maneuvers in Hop's sports plane, the Sprite. Rather than fly with Hop however, Tank flies with a new pilot, Tanner.

As crowds gather at the airfield, everyone grows amazed as the Justice Society of America arrives to witness Super-Duper Man's spectacle. Tank performs three stunt maneuvers, but each one culminates in a near disaster. First, Superman must fly out onto the field to prevent the Sprite from crashing into the ground. Later, Tank parachutes from the plane and lands in a lake. As the folds of the parachute threatens to pull him down beneath the water's surface, the Flash races out to drag him to shore. Still later, Hawkman must outpace the Sprite to prevent a wing-walking disaster. After three near-fatalities, Tank decides to leave the stunt flying to Hop.

U.S. Army Intelligence pilot Steve Trevor flies his fighter across the Atlantic in search of a Nazi spy. His jet runs out of fuel and he crash lands on Paradise Island. Two Amazons, Diana and Mala recover him and bring him to their hospital. Diana spends several days nursing his wounds and slowly begins to fall in love with him. Her mother, Queen Hippolyta reminds the Amazon that men are forbidden to set foot on Paradise Island, much less remain there. She declares that as soon as Trevor is fit for travel, he is to be returned to the United States.

During Steve's convalescence, Hippolyta and Diana use the Magic Sphere to divine the nature of Steve's arrival on the island. They look into the past and learn of Trevor's secret mission.

Two Nazi agents named Von Storm and Fritz hijacked an experimental robot plane and attempted to bomb an army airfield. Trevor heroically took control of the plane and drove the Nazis away. He was in pursuit of Fritz' fighter across the ocean, when he crashed on the Island.

Hippolyta decrees that an Amazon agent should be sent to the United States to aid the American in their fight against the Nazis. She holds a great tournament to determine which of her warriors should act as their good will ambassador. Diana wants to participate in the tournament, but Hippolyta forbids it.

Diana disguises herself with a simple mask and enters the tournament anyway. She masters every competition and becomes one of two finalists to compete in the Bullets and Bracelets competition. Diana defeats her opponent, Mala, and reveals her true identity to the crowd. Hippolyta agrees to allow Diana to travel to the United States. She provides her with a patriotic costume and bestows upon her the name of Wonder Woman.

Retrieved from "https://heykidscomics.fandom.com/wiki/All-Star_Comics_Vol_1_8?oldid=1526652"
Community content is available under CC-BY-SA unless otherwise noted.