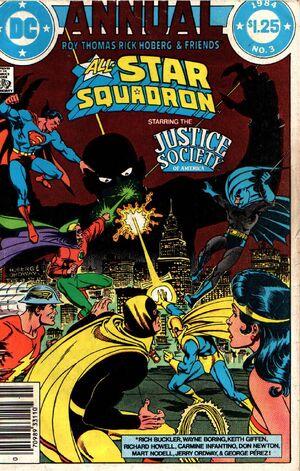 Appearing in "Justice Society of America"Edit

Synopsis for "Justice Society of America"Edit

Ian Karkull was an enemy of Doctor Fate, who was presumed dead. Karkull was not dead however, but fled to the Dark Dimension worshiped by the denizens of Ragnor known as the Shadowlands. The priests of Ragnor sacrificed the shadows of their victims to the forces of the Shadowlands and Karkull collected these shadows to empower himself. In 1941, he used the arcane forces in the Shadowlands to learn the names of future presidents of the United States and dispatched a strike force of super-villains to murder them (The villains: Alexander the Great, Catwoman (Selina Kyle), Doctor Doog, Ian Karkull, Lightning Master, Sieur Satan, Tarantula, Wotan and Zor). This effort was opposed by the Justice Society, which thwarted each of the villains except for Karkull's ally, Wotan. What effect the murder of Wotan's victim was has never been revealed. Tracking the trails of the emissary villains, the JSA confronted Karkull, blasting him with their combined powers. The forces exceeded Karkull's ability to contain the ancient shadows, which then exploded out of him, seemingly tearing him apart. The radiation of the shadows' departure bathed the assembled heroes, apparently extending their lives and affecting them in other, unknown ways.

Retrieved from "https://heykidscomics.fandom.com/wiki/All-Star_Squadron_Annual_Vol_1_3?oldid=1695841"
Community content is available under CC-BY-SA unless otherwise noted.