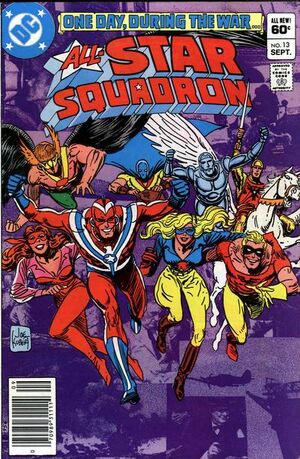 Appearing in "One Day, During the War"Edit

Synopsis for "One Day, During the War"Edit

After electing Liberty Belle regular chairman, the All-Star Squadron adjourns. Firebrand II reveals to the others her deep hatred of the Japanese because of her brother's injury at Pearl Harbor, but Rod Reilly reveals that his life was saved by a Japanese-American. Steel learns that his mentor, Dr. Giles, is dead, and his former girlfriend is married to an Army captain. Robotman finds himself in a different predicament: corrupt political boss Sam Slattery is trying to have him declared a public menace, and destroyed.

Retrieved from "https://heykidscomics.fandom.com/wiki/All-Star_Squadron_Vol_1_13?oldid=1409033"
Community content is available under CC-BY-SA unless otherwise noted.